The race was held in brisk south westerly conditions. This was a single race for all classes of yacht with results adjusted by handicap.
Results are available  HERE
Pete’s photos are available HERE

The Race was run in warm & sunny conditions. The breeze started out NE only getting up to about 5 knots before dissipating and reappearing as a SE at a similar force for a short time.
Results are available HERE
Pete’s photo’s are available  HERE

A view of the race from Warren aboard ‘Teneke’
The start worked well with Teresa hitting the hooter button, loud and clear for all to hear, on board Teneke exactly on time at 12.30 pm just as we got to the line with sheets pulled in and racing. Big thanks to Little Blue for allowing us a straight run at the start as I had my hands full counting down the last minute and avoiding being early to the line myself. Teneke swapped places several times on the beat up past Ravensbourne with Zac. Before Dave Purton on the fast Trimaran, Once Bitten , passed Zac and Teneke to take the lead just north of Mia. Zac made good way upwind tacking to keep out of the last of the fowl tide and kept ahead of us, but Once Bitten kept extending. Dawn Breaker with four on board hauled us in as the wind freshened rounding the Roseneath cross channel marker two boat lengths ahead of us on Teneke, we only had the two aboard so we were struggling to keep the boat flat. A good upper arm workout for Teresa on the jib with over an hours work to windward and an uncountable number of tacks Kites up on the trailer yachts and a nice sail home in a building breeze. Once Bitten always extending out in front to take both Line honours and handicap. With something like 20 knots at three legs Dawn Breaker had some trouble getting it’s kite down allowing Zac to sneak by and take second across the line and second on handicap. No one on Dawn Breaker noticed the very professional kite drop on Teneke as I showed them how to do it one person style without leaving the cockpit. Anyway they did finish in front of us so caps off to them. The other laser sailors had a great tussle with Micah, Pepa and Morris racing for two hours and separated at the end by only one minute. Over two hours of racing in a small dinghy is quite an effort. With over 50 years age difference across the three, youth won out. Marcus had a day to forget saying they kept running aground (5 times!) and missed his son’s expertise on the helm. Great to see Garry out in his “new” trailer yacht, Kekano. Best wishes to Julian, who was crewing with Garry, who unfortunately took a boom hit to the forehead and was off to hospital to be stitched up. Helping Garry retrieve Kekano afterwards, the boat needed a complete hose down with blood splatter everywhere and I do mean everywhere; jib, main, cabin roof, cockpit floor and seats.. Hope he is well on the mend. The results were very close on handicap with the first eight boats finishing within 5 minutes on corrected time, not bad for a two hour long race.
Results are available HERE
Photos through the lens of Pete are available HERE

The results from each days racing on Saturday / Sunday 11 & 12 December 2021 are
available below:
Day 1 Results: 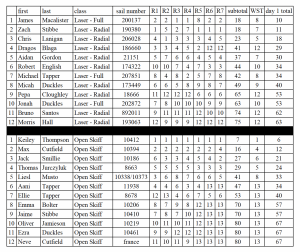 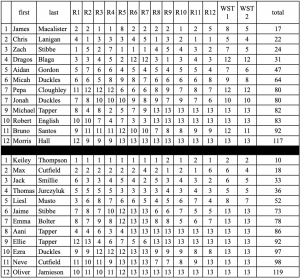 The OYC White Island Race was held on Saturday 11 December.
A grey day with occasional rain and a South Westerly blowing giving choppy conditions.
A field of 5 yachts entered with three completing the course.
Line honours go to HANSEL (Dave Hart); Second over the line was PIPSQUEAK (Mike Dewar) & third was HUIA (Gary Jackson)
A selection of photos taken by R/O Pete at the start and Andy aboard HUIA record this event. CLICK HERE TO VIEW